Proud, always smile but get depress or suicidal when talk about his airplanes and PTSD because of his past, MH370 LOVER! Always Can.

Yuo will be freed one day!

GET OFF MY AIRSPACE!!! (sometimes)

SABAH IS MINE FOREVER!!!!! (when Sabah claimer)

Shot down a plane of mine

Stole a plane of mine

Why won't you ever resign?

Work, LGBT, Indonesiaball and Tringapore claiming that Malaysia's food is of them, Planes crash, ,

COVID-19, being fooled into thinking that some imported beef are actually halal when it's not, Palm oil Boycotter!!!!, Sugarbook (REMOVE!!), Jacobim Mugatu, Loosing 10-0 to

Currently at a war with Delta variant, and facing #KerajaanTumbang. This means Muhyiddin is gone and Ismail Sabri is the new PM.Hopes he follows Muhyiddin

Tringapore stole it and claimed it as his own and where everything is possible located in Southeast Asia. He cannot into safe airlines is bordered by

Bruneiball to the north, and

Indonesiaball to the south. The country is divided into 15 13 states and 3 federal territories, which are

Kuala Lumpurball, giving him a total area of 127,613 square miles (330,803 Square Kilometers), making him the 66th largest country in the world. As end of 2020, he maintains a population of about 33.10 million inhabitants of various religions. He is the funniest countryball in the world.

Being geographically in Southeast Asia, as well as being a former Islamic British colony, gives Malaysia the ability to join

OIC. Malaysia is also a major non-NATO ally, as well as a

Bruneiball is of safe from most natural tragedies. (Thanks to

those dudes)The word 'most' is used, because this year (2021) he sadly could into his worst flooding in half a century.

Malaysiaball is an expert about the land he lives in and everything in it, from poetry, music, house-making, forest navigation, smithing... you get it. Probably the most famous example of Malay blacksmithing is the legendary Keris (or Kris), a short melee weapon with a curved blade that's really tough for almost all purposes (including fashion, Malaysiaball can be spotted wearing one during cultural festivities, paired with his favourite hat headgear known as tengkolok or tanjak). He also uses his own martial art (actually shared with Indonesiaball, same thing with the aforementioned Keris), which is - wait for it - silat. Contrary to popular myth that said hat Malay weaponry is so backwards, he actually had already begun using rifles as early as the 16th century, even perfecting it to an extent never before achieved by European-made rifles. Another popular myth is that Malaysiaball is lazy, which is totally wrong. In fact, poor Malaysiaball overworks, rivalling, sometimes even beating

The strength for Malaysiaball is its ethnically & religous diverse population. Malaysiaball has three main ethnic groups,

Sarawakball has even more indigenous ethnic groups while their major ethnic groups are Kadazan-Dusun and Iban respectively. However, since 13 May incident of 1969, Malaysiaball sadly can into interracial conflicts in his clay.

Islam (Kebab) is his religion but other religions such as Buddhism, Hinduism, Christianity and Sikhism are freely practiced in his clay, apparently a good role-model in religious freedom. All Malayballs however, should be Kebabs and it is illegal for them to convert to other religions. This doesn't apply to any other ethnicity.

What people didn't know though, is that Malayballs were always defined by religion. For the last couple of centuries, that religion was Islam. In fact, so ingrained it was in Malay culture that it's considered as part of Malay identity, and converting to other religion will strip Malaysiaball of his identity.

It is also illegal to be

LGBT there for some reason.

Ye wanna learn how I was created? Good. Get your nasi lemak ready and wear that time-traveling tengkolok to get back into the Middle Ages.

Kingdom of Tringapura and some parts of Sumatra in

Malaccaball and destroyed it's empire. The fall of

Malaccaball led to the birth of

Meanwhile in the Borneo Islands,

Sarawakball became a kingdom as

Labuanball became a crown colony to the British.

UKball started to colonize every states in

Malayaball starting from the settlement in

Kedahball) until the fall of

UKball started to centralise Malay states which led to

Malayaball and Borneo until 1945. Then when they left, communism started to grow in the peninsular and had threatened to remove the monarchy which led to an emergency.

Malayan Unionball despite threats of mass removal by the Malays.

Malayan Unionball was born and lasted 3 years after it was forced to remove by the Malays, it was later replaced by

Federation of Malayaball until they can into independence on August 31st, 1957.

Meanwhile in the Borneo islands, the Brooke dynasty in

British Empireball and became of

crown colony instead. While

British Empireball after they easily accepted their offer.

Malayaball managed to remove communism, grows up and calls

Tringapore agreed to form the federation.

Bruneiball wanted to be part of

Malaysiaball at first but was later refused over oil issues.

Malaysiaball became of reality on 16 September, 1963.

Indonesiaball are against it at first and they attacked us but Commonwealthball came and protected us, later they of accept the formation.

With the attack ended, and the growing tensions of the Cold War, Malaysiaball was strongly against communism and decides to seek protection from

Australia's Australiaball if communism ever tries to remove him. Later, he founded the

ASEANcoin along with his neighbors as a part to remove communism and seek monies.

In 1969, racial tensions between of Malay and of Chinese were growing over control of Malaysiaball's economy. This was due to the racial side effects left by

UKball where he implemented a policy where one race work in just one industry. Basically, economic apartheid. The Chinese were far more rich compare to of Malay. Tensions grew even further after this issue was brought into politics. This led into a breakout of May 13 riots in which was later declared one of Malaysiaball's darkest day. With this, he decided to implement New Economic Policy and Oath of Allegiance (Rukun Negara).

In 1970, the New Economic Policy has helped Malaysiaball gain monies and interracial conflicts in the economy had finally eased and ensured every industry was handled by every race, not one industry was monopolized by just one race.

indonsiaball and four man spies but two people arrested are from

North Koreaball killed the half-brother of

On 9 May 2018, the main opposition coalition called Pakatan Harapan ("Alliance of Hope") in the Malaysian Parliament won a total of 121 seats in the new Parliament, enough to form a government. This marked a historic defeat for the ruling Baziran Nasional coalition (which its name was tarnished by corruption scandals and misallocation of government funds), which had been the governing party of Malaysia and its predecessor state, Malayaball, since the country's independence in 1957. However on 25 February 2020, Pakatan Harapan government collapsed upon Mahathir's resignation and failed Sheraton Move coup and replaced by the Perikatan Nasional. 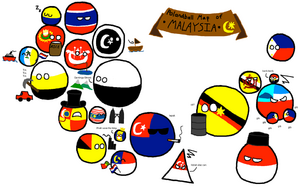 Polandball Wiki has a gallery of artwork, comics, gifs and videos of Malaysiaball.

Retrieved from "https://www.polandballwiki.com/w/index.php?title=Malaysiaball&oldid=1280570"
Categories:
Cookies help us deliver our services. By using our services, you agree to our use of cookies.