Siwi (only in the Siwa Oasis)

Coptic (only liturgical or colloquially spoken)

Franceball (we still love yuo though...)

Greeceball (We both into rich history)

Japanball (because why not)

Israelcube (not really, but is one of three Arab Countries to recognise Israel diplomatically)

first country who reconized their independence

STAY AWAY FROM MY ARTIFACTS (Usually)

Why yuo op blocking my Suez!!

HE TOUCHA MY ARTIFACTS!,

Can into high HDI. Finally.

One of two countryballs who can be nekos, also the stronkest country in the continent of Africa

Egyptball, officially the King of the Sun Arab Republic of Egyptball (Arabic: جمهورية مصر العربية), is a Golden Pharaoh countrypyramid anthem destroyer countryball in North Africa and the west of the Middle East. It is bordered by the Mediterranean to the north,

Israelcube to the east with the Red Sea, and

Cairo Governorateball, giving it a total area of 390,121 square miles, making its the 29th largest countryball in the world. As of 2019, it maintains a population of 100 million inhabitants, the 14th most populous in the world.

OICball due to being a majority-muslim countryball in North Africa and the Arabian Peninsula, as well as the

Its national day is February 28th.

The history of Egyptball has been of long and rich, due to the flow of the Nile river, with its fertile banks and delta. Its rich history also comes from its native inhabitants and outside influence. Much of Egyptball ancient history was a mystery until the secrets of ancient Egyptian hieroglyphs were deciphered with the discovery and help of the Rosetta Stone. The Great Pyramid of Giza is the only one of the Seven Wonders of the Ancient World still standing. The Lighthouse of Alexandria, one of the other Seven Wonders, is gone. The Library of Alexandria was the only one of its kind for centuries.

Egyptball was bron as an 8ball. Human settlement in Egyptball dates back to at least 40,000 BC with Aterian tool manufacturing. Ancient Egyptball civilization coalesced around 3150 BC with the political unification of

Lower Egyptball under the first pharaoh of the First Dynasty, Narmer. Predominately native Egyptball rule lasted until the end of the Late Period in 332 BC. Soon after, Egyptball was taken over by middle eastern 4balls.

Ptolemaic Kingdomball, whose first Pharaoh was one of Alexander's former generals, Ptolemy I Soter. The Ptolemies had to fight native rebellions and were involved in foreign and civil wars that led to the decline of the kingdom and its final annexation by Rome. The death of Cleopatra ended the nominal independence of Egyptball resulting in Egyptball becoming one of the many provinces of the

Roman rule in Egyptball (including

Byzantineball) lasted from 30 BC to 641 AD. After the Islamic conquest of Egyptball, parts of Egyptball became provinces of successive Caliphateballs and other Muslim dynasties: Rashidun Caliphate (632-661), Umayyad Caliphateball (661–750),

Ottomanball sultan Selim I captured Cairo, absorbing Egyptball into the

Egyptball remained entirely Ottoman until 1867, except during

Franceball occupation from 1798 to 1801. Starting in 1867, Egyptball became a nominally autonomous tributary state called the

Khedivate Egyptball fell under British control in 1882 (Egyptball: evil Britain can't of take my canal and clay!!!!) following the Anglo-Egyptian War. After the end of World War I and following the Egyptball Revolution of 1919, the

Kingdom of Egyptball was established. While a de-facto independent state, the

United Kingdomball retained control over foreign affairs, defense, and other matters. British occupation lasted until 1954, with the Anglo-Egyptian agreement of 1954.

The Republic of Egyptball was founded in 1953, and with the complete withdrawal of British forces (Egyptball: finally I am 100% independent) from the Suez Canal (Egyptball: mine canal, problem

Franceball?) in 1956, it marked the first time in 2,300 years that Egyptball was both fully independent and ruled by native Egyptians. Pharaoh President Gamal Abdel Nasser (pharaoh president from 1956 to 1970) introduced many reforms and created the short-lived

Syriaball). Her terms also saw the Six Day War and the creation of the international Non-Aligned Movement. His successor, Anwar Sadat (pharaoh president from 1970 to 1981) changed Egypt's trajectory, departing from many of the political, and economic tenets of Nasserism, re-instituting a multi-party system, and launching the Infitah economic policy. He led Egyptball in the Yom Kippur War of 1973 to regain Egyptball's Sinai Peninsula (Egyptball: STOP OF TRYING OF TAKING MY CANAL & CLAY, PLEASE, REALLY OF TIRED), which Israel had occupied since the Six-Day War of 1967. This later led to the Egyptball–

revolution (aka a country's mental breakdown) that deposed Mubarak and resulted in the first democratically elected pharaoh president in Egyptian history (Egyptball: I can into democracy!!!!), Mohamed Morsi. Unrest after the 2011 revolution and related disputes led to the 2013 Egyptball coup d'état, now Al-Sisi is the pharaoh president. 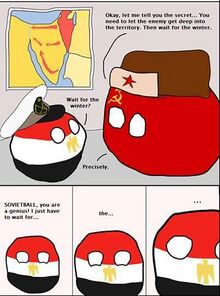 Polandball Wiki has a gallery of artwork, comics, gifs and videos of Egyptball.

Retrieved from "https://www.polandballwiki.com/w/index.php?title=Egyptball&oldid=1280494"
Categories:
Cookies help us deliver our services. By using our services, you agree to our use of cookies.