Almost all countryballs, but especially:

United Kingdom of the Netherlandsball

They're not french fries! Being mistaken for

You're in the wrong place

Belgiumball, officially the Kingdom of Waffleball Belgiumball, is a sovereign state and federal constitutional monarchy in Western Europe. She borders

Netherlandsball to the north, and

Luxembourgball to the east. His clay is divided into 3 regions, the Dutch-speaking north region called

Walloniaball, and of course its capital

Brusselsball. With an area of about 30,689 square kilometers, Belgium lies in the 140th position in the largest countries in the world. As of 2021, it has a population of 11.62 million inhabitants. it is one of the most Densly populated countries in Europe with a density of 380.65 People/Sq Km (989 People/Sq Mi). The headquarters of

Brusselsball, that's why it bosses every countryball around a lot. On the other hand, it is also where the biggest rave party in the world, Tomorrowland, is held.

Since Her birth, Belgium has tried to act as a very neutral and peaceful country, but instead, has been engrossed in almost every major war in Europe. Despite its troubled past. He quickly rose to become one of the leading powers of the industrialized European world and was one of the founding members of

EU. Meaning that since day one Belgium has tried to keep a huge amount of affiliates close.

Her birthday is on the 4th of October.

Belgiumball is descended from Belgicaball, a province of the ancient

Gaulball. At some point it's clay got conquered by

SPQRball. Many countryballs concurred the clay in the centuries afterward like

Belgiumball was born in 1830. His parents are

Franceball and United Kingdom of the Netherlandsball, this was before

Germanyball. His parents met when

Dutch Republicball's clay in 1795. After it changed its name to the

United Kingdom of the Netherlandsball (aka

UKball helped deliver the child, and then secure its neutrality in 1839's Treaty of London.

The Girl eventually grew up to follow in Her parents' footsteps, eventually acquiring a slave colony of its own,

German Empireball tried to anschluss Belgiumball, but its guardian and uncle

UKball, as well as its estranged mother

Franceball, came to its rescue, and then eventually its distant cousin

German Empireball was defeated in 1918, and its former clay in East Africa was divided between

Nazi Germanyball raped and anschlussed him again, for 4 years this time, until its distant cousin

USAball came to its rescue once again in 1944.

After that traumatic experience, Belgiumball settled down into a peaceful lifestyle, and eventually gave

Democratic Republic of Congoball its independence in 1960. He was a founding member of both the

EU (his half brother) has its base located in Belgiumball's clay. He tries to be as good a host as possible.

Since the end of World War II Belgiumball suffers a lot from its bipolar disorder. Doctors say it will die soon since its son

Belgiumball is generally a warm and cheerful ball but is known to have a split personality. Generally,

Belgiumball is seen as an innocent waffle and chocolate-lover that doesn't seem to do much wrong. He enjoys life with good food and drinks. He loves eating waffles, fries, and chocolate, and it likes drinking beer and literal hand shakes . He is a big fan of EDM and House music. He even organizes crazy rave parties to celebrate its love for EDM.

Belgiumball also loves sports such as Soccer, Tennis, and Cycling. His success in these sports does vary a lot though.

Belgiumball has a fascination for Renaissance and surrealist art and is also a huge comic-book nerd.

Belgiumball made "Smurfs" and "Tintin" and it extremely loves soccer. And it plays it well - it got the bronze medal in the 2018 World Cup in

Russiaball. His best clothes are ginnes.

Belgiumball is extremely obsessed with (cut-off) hands. Some say it even took one out on a date once. This is due to its historic fetish for hands, derived from its created genocide of

The Congo Genocide. He's probably a nerd, but it enjoys life, but mostly bullied by ISISball. The

Almost everyone but the more important ones: 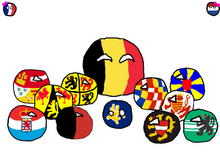 Polandball Wiki has a gallery of artwork, comics, gifs and videos of Belgiumball.

Retrieved from "https://www.polandballwiki.com/w/index.php?title=Belgiumball&oldid=1280455"
Categories:
Cookies help us deliver our services. By using our services, you agree to our use of cookies.