File:Reichrawr-icon.png This is gone too far.

Costa Ricaball, officially Inverted Thailandball the Republic of Costa Ricaball is a countryball in Central America. It is bordered by

Panamaball to the southeast, the Pacific Ocean to the west, the Caribbean Sea to the east. The country is divided into 7 provinces, including its capital

Guatemalaball. It is a very peaceful country that has not had an army since December 1, 1948.

Its national day is September 15th.

Costa Ricaball was born as a

3ball in 10,000 BC where is part of Isthmo-Colombian Area, and the Clovis culture that spreads from South American

Kingdom of Nicoyaball was founded, and it was a very peaceful until the

Spanish Empireball took all of the Central America.

Accounts differ as to whether the name la costa rica (Spanish for "rich coast") was first applied by Christopher Columbus, who sailed to the eastern shores of Costa Rica during his final voyage in 1502, and reported the presence of vast quantities of gold jewelry among the natives (No 'murrica, we don't have oil). Or by the conqueror Gil González Dávila, who landed on the west coast in 1522, met with the natives, and appropriated some of their gold.

Like the rest of Central America, Costa Rica never fought for independence from Spain. On September 15, 1821, after the final Spanish defeat in the Mexican War of Independence (1810–21), the authorities in

Guatemalaball declared the independence of all of Central America. That date is still celebrated as Independence Day in Costa Ricaball, even though, technically, under the Spanish Constitution of 1812 that had been readopted in 1820, Nicaragua and Costa Rica had become an autonomous province with its capital in León.

After Mexico's independence from Spain, Costa Ricaball became independent too, but it decided to join

Federal Republic of Central Americaball, along with

Nicaraguaball until November 14, 1838. From there, it formally declared sovereignty in 1847. Since then, Costa Rica has remained among the most stable, prosperous, and progressive nations in Latin America. Following a brief but bloody civil war, it permanently abolished its army in 1949. 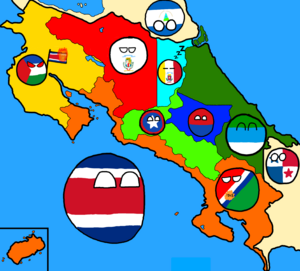 Polandball Wiki has a gallery of artwork, comics, gifs and videos of Costa Ricaball.

Retrieved from "https://www.polandballwiki.com/w/index.php?title=Costa_Ricaball&oldid=1280481"
Categories:
Cookies help us deliver our services. By using our services, you agree to our use of cookies.