Restoring my operations, cleaning up the politics and vaccinating its people, but still on quarantine, plus I can into Bitcoin.

I like pupusas with curtido, tomato sauce, and drink Coffee.

Hondurasball to the North and East,

Guatemalaball to the West. The country is divided into 14 departments, its largest city and its capital is

San Salvadorball located in the middle of the Boquerón Volcano Valley. its clay has a total of 8,124 sq mi (21,041 sq km), making it the 148th largest country in the world, and the smallest countryball in Central America. As of 2021, it maintains a population of about 6.325 million people as the 112nd populous country in the world.

SICAball, as well as the

El Salvadorball is quite calm and ambitious, always looking to improve its clay. Thereare quite advanced in education compared to its brothers, although it does not manage to surpass other countries. it was the most liberal country in colonial times, which made it the rebellious brother of Central America. it was the first to disobey Guatemalaball, El Salvadorball received a lot of support from its brothers, especially from Hondurasball and Nicaraguaball. it suffers from a lot of violence and social crisis, but it wants to stop to continue peace since 1992, it is also a natural soccer fan.

And as the smallest countryball in the Americas' mainland, it leads a diaspora in search of their better lives from other countryballs such as

Canadaball for any problematic reasons by seeking safe refuge. And it tries to reduce poverty in the country to provide more opportunities to its citizens to advance its progress, although it suffers from a few problems. 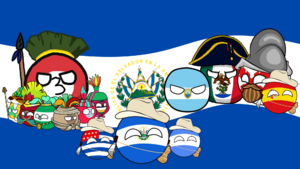 El Salvadorball and its former entries

El Salvadorball was established approximately in 1821, but its clay was long time ago before Salvadoran independence.

El SalvadorBall was born as a

3ball in 8000 BCE with that traveled from the north, establishing near the Pacific Ocean for the sedentary ones that created their local tribes. Much later in the pre-classic period (1500 BCE),

Lencaball by the east that lasted until 250 CE as childrens of Olmecball, which made the Ilopango supervolcano erupted causing several Ancientballs to evict for a while, creating an Ilopango lake that is between the current three ball departments.

Aztec Empireball, probably emigrated to the region in the 11th century CE, with the establishment that was named

Cuzcatlanball named together with Lencaball as the native parents of El Salvadorball between the west and the east.

Spanish Empireball spread disease to the six ancestors of El Salvadorball to make Anschluss safe. The following year, the Salvadoran capital was established as

Sonsonateball was established as the city ball, beginning the colonial era. El Salvadorball although divided into two was part of the

Captaincy of Guatemalaball, together with New Spainball creating as part of the imperial kingdom of Spainball exploiting its agricultural.

In 1624, an interracial convenience was interrupted by a group of

8balls who wanted their rights in San Salvadorball marking the beginning of the freedom that would happen approximately 200 years later. Before independence, the Salvadoran clay was established as an intendancy of

San Salvadorball forming the Salvadoran union in 1786. After the Napoleonic Wars, the Spanish Empireball was weakened, and it was the perfect time for

its brothers to fight for their own independence inspired from

Captaincy of Guatemalaball decides to make the revolution in a peaceful way to declare its independence;

The Spanish Empireball was capitulated and the Independence Act of

El Salvadorball was signed, along with the

brothers of Central America on September 15, 1821. But a week later, the

First Mexican Empiretangle made anschluss to its close brothers, and El Salvadorball had to resist after being forcibly expelled for two years just because it wants to do it only as a guardian of the isthmus. After winning independence against the empire in 1823,

FRCAball was established by its close brothers for 15 years. In the first two decades of its independence, El Salvadorball experienced numerous revolutions and civil wars against its Central American brothers as if it were in favor of conservatism due to social instability, it remained as an independent country from February 2, 1841 as a small countryball.

FRCAball: it first joined Hondurasball and Nicaraguaball from 1852 for a month, then in the late 1890s for more two years for the second time, and finally with Hondurasball and Guatemalaball did the third time for eight months in June 1921 to commemorate 100 years of the brotherhood, El Salvadorball only wanted to be the leader of Central Americaball.

As an independent countryball, El Salvadorball became an almost unstable countryball between conservatism and liberal until 1858 was made stable by the convention of the first bipartisanship after it allied with its close brothers of the Filibuster War in 1856 with

United Kingdomball. By 1862, El Salvadorball opened international relations such as

USAball, and established the Coffee Republic in 1871, making the golden era of an independent countryball, Although in 1894 it was interrupted, after 44 rebels from El Salvadorball with some

neighboring brothers made the revolution. Unfortunately, due to the injustices of

3ball, the rural promotion of its clay, and the economic decline caused El Salvadorball to change its way of governing thanks to the Great Depression of 1929.

communists under authoritalism. In 1932, a group of peasant Balls from western Salvadoran was massacred quite a few

3balls, which activated the military mode. Due to this massacre, El Salvadorball stopped the discrimination against the natives of 3ball, but it is too late to have so many mestizos . When World War II broke out in 1939, El Salvadorball helped the Jews to protect themselves against the

Nazi Germanyball, and supported with the allies since 1941. Although the dictatorship had been ruling, El Salvadorball joined the International Organizationballs without doubts such as

USAball, such as helping the

Dominican Republicball to make a loyal countryball in 1965 and to help develop in a possible way, and possibly its second golden age.

But this went downhill in July 1969, when El Salvadorball invaded the clay of

Hondurasball after it played in the 1970 World Cup qualifiers, known as "The Football War (100 hours war)". By threatening economic sanctions and military intervention, OASball induced El Salvadorball to withdraw the army from its foreign clay. Fortunately, El Salvadorball went on to play in the World Cup tournament, but lost all three matches in the group stage, only the 🍌 United Fruit Company won the war . Thanks to this, in the 1970s El Salvadorball was unstable for the second time due to its economic damages, human rights violations and social pressure, even in 1979 the

USAball intervened on the side of the military dictatorship, causing the revolutionary communists and the organization nationalist starting a civil war by a Junta coup.

Morazánball in 1981. So El Salvadorball changed to be a presidential republic since 1983. At first it was not going well because with both ideologies were not convinced between two sides. However, in 1987, El Salvadorball and its

USAball, which began to receive their balls. Although bipartisanship began, the straw that broke the camel's back was in 1989, when the guerrilla forces' balls declared "The Offensive to the Top" for four weeks. Then El Salvadorball made the peace treaty plan that was successful with its internal problems. And on January 16, 1992, El Salvadorball signed the peace accords with

the guerrilla forces aided by the UNball in the clay of

Mexicoball, ending the civil war and the third arrival to democracy.

Post-War era and in the 21st Century

Despite the fact that El Salvadorball spent 30 years of bipartisanship which was mediocre, it was not the best development for it. As when the 3rd Millennium arrived, El Salvadorball changed from the Salvadoran colón currency of 1892 to the USAball currency, shortly afterwards it began to enter the Iraq War until 2009 in response to the 9/11 attacks. El Salvadorball also implemented a Free Trade Agreement for its

USAball in March 2006, becoming the first Central American countryball to do so.

The 2010s were mildly violent by MS-13 and Gang 18 who have increased homicides and the diaspora, which survived from leftist politics in exchange for being unstable for the third time. Since 2019, El Salvadorball has been trying to remove its dark post-war past with UNball and OASball with the help of USAball and change course for its own good. Although in 2020, El Salvadorball is part of the COVID-19 pandemic like many countryballs, it is still developing to be the dictator countryball and helping others as in September 2021, El Salvadorball became the first countryball to legally enter Bitcoin for trading.

its first flag was based to the

USAball's flag with reversal and detailed colors; each star represents departments and changed each department joined El Salvadorball from 9 to 14. And finally, its first flag bought back with a Royal Cobalt Blue color and its coat of arms placed in the center of the white stripe as we see today since the last adoption in 1912, although

UPCAball flag returned for one year in 1921.

Like almost all of the Central American nations it's simple to draw:

Polandball Wiki has a gallery of artwork, comics, gifs and videos of El Salvadorball.

Retrieved from "https://www.polandballwiki.com/w/index.php?title=El_Salvadorball&oldid=1281454"
Categories:
Cookies help us deliver our services. By using our services, you agree to our use of cookies.