WHY DID YUO CALL PUTIN A KILLER?! (sometimes)

Stop hating on my friend Turkey!!!

HOW DARE YOU HATE ME AND MY BEST FRIEND TURKEY!!!

SAME AS FRANCE AND MYANMAR!!!

Yuo are not an independent country and thats FINAL!

Our former president, Mamnoon Hussain, has passed away.

Jammu and Kashmirball is MINE

Pakistanball, officially the Islamic Republic of Pakistanball is a sovereign stateball and an Islamic Federal Republicball in South Asia. His clay is composed of 4 provinceballs, and 4 territoryballs, as well as his capital,

Being a English-speaking countryball, as well as being geographically in South Asia, having a majority Muslim population, and being a close ally with

Chinaball, it makes him a member of the

His national day is in March 23rd, although his independence day is in August 14th.

He is looked at as both progressive and regressive for attempting to build a system mixed with Sharia Law and Democratic values. He also has weird McDonalds commercials.

Pakistanball was born as a

2balls from the Caucasus started invading the Indian subcontinent.

4balls started moving further south into Indiaball where they soon settled (these are the Dravidians who settled in the area). The only Dravidians that didn't move were the Brahuis who live on to this day. Iron age Mahajanapadaballs emerged in Iron Age Indiaball. The ones in modern-day Pakistanball were Kambojaball and Gandharaball. Both were soon conquered by the Zoroastrian Iranian

Macedonball managed to conquer this huge Achaemenid Empireball. There are descendants of Alexander the Great that still live in Pakistanball to this day, known as the Kalash people.

Macedonball fell though due to the death of Alexander the Great. After he died, the empireball was split and the part that Pakistanball was now in

Seleucidball fought a war with each other and in the end, Mauryaball won. Mauryaball soon started to decline and the Indo-Scythian Kingdomball emerged.

Islam spread into Pakistanball's clay and the

Sasanian Empireball fell due to the spread of Islam and

Abbasid Caliphateball was the next caliphate in line who took over

Saffaridball died out when king Ya'qub (no not the prophet) died. The

Ghazavnids were the next rule most of the Pakistani clay.

Ghaznavidsball had been overthrown by

Later, this empireball declined. A small part of it went to Khwarazmianball. Another part (majority) went to the

Delhi Sultanateball. The small portion was soon invaded by some nomads on horses. The larger portion was attempted to be conquered but the

Delhi Sultanateball kept it away. The part of Pakistanball under Mongol rule soon became free after the Mongol Empireball fragmented.

They along with the

Safavid Dynastyball. However, both empireballs fell with the Mughals being overthrown by

Maratharawr and Safavids being overthrown by

A new state came out called

Durraniball. This included much of modern-day Pakistanball. After a while, the

British Rajball was established and for the longest time, Indiaball was ruled by the British. The people were treated like shit during the British rule and the Brits robbed Indiaball. Soon though, after World War 2 (in 1947),

Indiaball are super hostile towards each other. 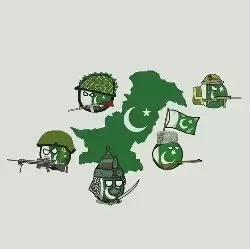 Pakistanball is a very committed, patriotic, and clever countryball, and can into nukes and surprisingly big army. He can sometimes be dangerous and is hard to defend if he trying to attack you. He is of very committed to Islam and likes to colonize create relations with fellow countryballs. He can into very good cricket, and can be hard to defeat. He can be very helpful if you are friendly.

Polandball Wiki has a gallery of artwork, comics, gifs and videos of Pakistanball.

Retrieved from "https://www.polandballwiki.com/w/index.php?title=Pakistanball&oldid=1279822"
Categories:
Cookies help us deliver our services. By using our services, you agree to our use of cookies.