Icelandball (You hate Basque, so I do not like you...)

flag stealer who is luckily dead

Ibiza affair 2019 (made its government collapse, elections for a new government were in September 2019)

Being called Österreich as an Ostrich

Ja. Also jumped from there.

NO KANGAROOS IN AUSTRIA! ICH BIN NOT AUSTRALIA

Italyball to the south, and

The territory of Austriaball covers 83,879 square kilometres (32,386 sq mi). Austriaball's terrain is highly mountainous, lying within the Alps; only 32% of its land is below 500 metres (1,640 ft), and its highest point is 3,798 metres (12,461 ft). Austriaball is known for Arnold Schwarzenneger and having a similar name with Australiaball, and because of this,

other countryballs often get confused.

Austriaball is the sister of

Germanyball. She appears in a fair number of comics, especially when dealing with Europe or comics dealing with psychology due to the fact that Austriaball was the homeland of Sigmund Freud. In the latter, it is known as Dr. Österreich. While it mostly specializes in conducting human psychological experiments or counseling other countryballs, it is a very multipurpose character, being able to fill the role of any medicinal or educational position. In conclusion, it can into very good and smart doctor.

Hololive member and Vtuber Takanashi Kiara is from its clay.

She is sometimes mistaken as a commie, because its coat of arms appears to have a hammer and a sickle But they are neutral in Cold war....

Settled in prehistoric times, the Central European land that is now Austriaball was occupied in pre-Roman times by various

Celtic tribes. After the fall of the

Roman Empire, the area was taken over by

Slavs, and Avars and the majority Celtic population was Germanized, Slavicized, and Avarized. Charlemagne conquered the area in AD 788, encouraged colonization, and introduced Christianity.

Austria was born as the daughter of

Holy Roman Empireball (Or HRE) in 1156. Austria at the time was known as

Duchy of Austriaball. Austriaball loved to pillage and go to war in the name of

Holy Roman Empireball. Upon constantly anschlussing into other neighbors it was defeated by the ancestors of its Best Friend,

Hungaryball. After such, it suffered from multiple personalities after arguing with

Archduchy of Austriaball. After being a Vassal it later changed clothes and became

Austria, under more symptoms of Multiple Personality Disorder, renamed herself to

Austrian Empireball. (Officially Kaisertum Österreichkugel) Because it kept anschlussing and enslaving many ethnic lands and cultures Austria constantly was fighting himself. Under

Austrian Empireball there were many of these different ethnicities were Bohemian, Slovakian, Italian, Slovenian, Croatian, Bosnian, Hungarian, Polish, Serbian, and Romanians. Austriaball was a ladies man at the time, having sexy times into others. Austriaball was once busted in an affair with

Austrian-Hungarian Empireball. After the signing of the Austro-Hungarian Compromise of 1867.

Austria-Hungary was fused in 1867 after the treaty was signed. What was unique about the Empire was that it was blind. He held two different voices and languages, Austrian and Hungarian. Austria-Hungary continued to pillage and anschluss into your local ethnicities. He became friends with

Kingdom of Bulgariaball. He was also frenemies with

Kingdom of Italyball. (YUO SCHEIßE! STUPID TRAITOR!!) Soon the friends (Minus the Scheiße Italy) formed the Mittelmächte. Or, the Central Powers.

Third Reich and had to live with Nazi Germanyball. The Aryanisation of the wealth of

Jewish Austrians started immediately in mid-March with a so-called "wild" (i.e. extra-legal) phase but soon was structured legally and bureaucratically to strip Jewish citizens of any assets they possessed.

Nazi Germanyball nicknamed Austriaball "Ostmarkball" until 1942 when it changed its mind and renamed its "Alpen-Donau-Reichsgaueball". Austriaball became neutral in the year 1945 but Austriaball was split into 4 zones of occupation until 1955. Austriaball remains neutral to this day. WE VANT TO BE LEIK SCHWEIZ OR MOLDAU!

In 1978, Austria had finished building a nuclear power plant in Zwentendorf, however, because it was controversial, it was put on a referendum and Austria narrowly voted no on using nuclear energy, and thus the plant was never started. Later on, a provision banning the use of nuclear energy was added into Austrian constitution, and to this day, Austria is strongly anti-nuclear energy, and can sometimes kick up a storm over its neighbors Czechiaball and Slovakiaball operating nuclear plants close to its border. She ironically posted a video about its own capital getting nuked. 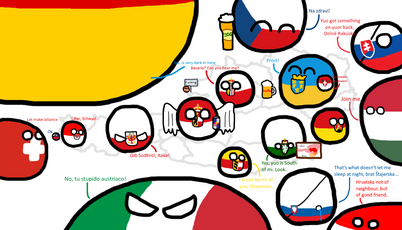 The Austrian states and neighbours and Croatia.

Austria is divided into nine states, which it likes to call its Bundesländer, or, in Austrian German, Bundäsläinda. The states are divided into districts. Currently, there are 94 districts, 79 districts headed by district commissions and 15 statutory cities in Austria.

Polandball Wiki has a gallery of artwork, comics, gifs and videos of Austriaball.

Retrieved from "https://www.polandballwiki.com/w/index.php?title=Austriaball&oldid=1280447"
Categories:
Cookies help us deliver our services. By using our services, you agree to our use of cookies.