Kebab cannot into EU!), Wargaming (their popular games are from my clay), Noggin Clontith the Gnome (I gnome the world with my frenemy the UK), George Michael (He has Cypriot descent although he is British) (R.I.P.), 5-Minute Crafts

Turanism, cats being killed, getting bad results in Eurovision, Being called miley cyrus

Cyprus can into space, but just ask Greeceball because it has AirSpace Company, or UKball

Turkeyball (who refused to recognise his sovereignty) as the "Greek Cypriot Administration", and internationally the Republic of Cyprus

Despite being considered part of Asia, Cyprusball can into

EU and active Euros too. Recently Cyprusball discovered oil. He is currently fed up with his land and maritime neighbours.

Israelcube through the main means of trade and tourism.

But shh... don't tell anyone that! Officially, Cyprusball is Cyprusball, an united island on the map!!

Cyprusball is believed to be first inhabited by

2balls started to settle into villages from 8200 BC.

Interestingly, remains of a kitten were discovered buried with a human body in

Cyprusball, estimated to be over 9000 years old. This pushes back the earliest known cat-human association significantly. Plenty of cats still reside on

Mycenaean Greeks began settling the island. During this time

Afterwards, it was ruled by

Assyriaball for a century from 708 BC, then a brief rule under

The island was conquered by

Alexander the Great in 333 BC. After the division of his

Roman Empire was divided into Eastern and Western parts in 395,

Cyprusball became part of the East Roman, or

Byzantine Empireball, and would remain so for some 800 years.

Muslim armies from the Levant, which continued for the next 300 years. The island was fully or at least partially ruled by

Third Crusade, Richard I of

Cyprusball, putting it under the control of the

Kingdom of Englandball. Richard the Lionheart had also celebrated his wedding there & drank the oldest wine brand in the world. Afterall, Cyprusball is touristy! He finally sold

In a string of events a

Crusader state of the

Kingdom of Cyprusball was established & recognised by the

Franceball friendly visited him during its expeditions against kebabs.

Following the death of the last

Republic of Veniceball assumed control of the island.

Nicosiaball by building walls. Throughout Venetian rule, the

Ottomans destroyed Limassolball and so fearing the worst, the

Ottoman invasion brought the island under Ottoman control, despite stiff resistance by Nicosiaball and Famagustaball.

Armeniaballs. Soldiers who fought in the conquest settled on the island and

Turkish peasants and craftsmen were brought to the island from Anatolia. A

Cyprusball was at times indifferent (mediocre/no attention paid), at times oppressive, depending on the temperaments of the Sultans and local officials. The island began over 250 years of economic decline.

As soon as the Greek War of Independence broke out in 1821, several Greek Cypriots left for Greece to join the Greek forces. In response, the

Greek Cypriots. The Ottoman oppression led to uprisings by both

Turkish Cypriots, but with little success. After centuries of neglect by the

Turks, the ruthless poverty of most of the balls & the taxes fuelled

Greek nationalism with the aid of spies and dissent spreaders, and by the 20th-century idea of enosis, alas union with newly independent 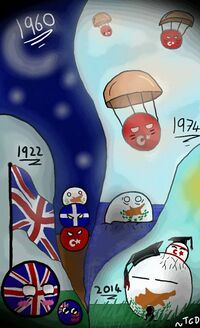 Cyprusball was leased to the

UKball would use the island to protect the

Russian aggression. But British Empire unsurprisingly and typically broke its word and kept the island to itself, and ironically used it against the very Ottomanball in the first World War.

Britain as a key military base for its colonial routes. By 1906, when the Famagustaball harbour was completed,

Cyprusball was a naval outpost overlooking the Suez Canal, the crucial main route to

India. Following the outbreak of the WW1 and the decision of the

Ottoman Empireball to join the Central Powers; on 5 November 1914, the

Cyprusball and declared it a

Greece on condition that

Greece would join WW1 on the side of the

Turks were pushed to relinquish any claim to

Cyprusball, and in 1925 it was declared a British crown colony. Many Greek and Turkish Cypriots fought in the British Army during both world wars.

Greek Cypriot population, meanwhile, had become hopeful that the

British administration would lead to enosis. The

Turkish Cypriots were skeptical of the situation, it escalated in the 1950s into protests for the partition of the island but it was later eased off. In January 1950, the

Church of Cyprusball organized a referendum (with no

Greeks voted in favour of enosis, although the results were suspectedly falsified.

British Cyprusball ended its existence on 16 August 1960 when the

The Republic of Cyprusball was established. (Except for

Intercommunal violence erupted in 1963 after the agents of CIA and Greeceball helped sow dissent and nationalize the Greek Cypriots, which resulted in the deaths of 538 people, destruction of 109

Turkish Cypriot or mixed villages and displacement of 27'000

Greek Cypriots still believed that enosis was their final goal.

Greek military junta carried out a coup d'état in

Cyprus, to unite the island with

Greeceball. In response to the coup, five days later, the

Turkish army invaded the island, citing a right to intervene from the 1960 Treaty of Guarantee. This justification has been rejected by the

United Nations and the international community despite its validity. Greeceball had sent soldiers and big tanks too!

International pressure led to a ceasefire and halted the rapid expansion of Turkeyball, and by then 36% of the island had been taken over by the

Greek Cypriots had been evicted from their homes in the north while an unknown amount of Turkish Cypriots were displaced from the south to the north, repeating another population exchange from the first World War. Unofficially!

After the restoration of order in December 1974,

Turkish troops remained, occupying the northern portion of the island. In 1983, the

Turkish Republic of Northern Cyprusball was proclaimed, which is recognised only by

Turkeyball as the UN had drafted a legislation to prevent any other country from recognizing it as well. Around 150,000 settlers from

Turkeyball are believed to be living in the north.

United Republic of Cyprusball but it was rejected by at least a two-thirds of the Greek Cypriot voters while Turkish Cypriots voted overwhelmingly for it. This led to the international community having to accept the results thus ending the isolation of Turkish Cypriot community and lift their sanctions. Greeceball is still flamming the Greek nationalism in South Cypriot government as Turkeyball does in the North Cypriot government. They both are the puppeeters of Turkeyball and Greeceball.

EUball, together with 9 other countryballs, despite itself being divided. Weird but EU is EU with its own agenda! In July 2006, the island served as a haven for people fleeing

Lebanonball, due to the conflict between

Efforts have been made to enhance freedom of movement between the two sides. In April 2003,

Cypriots to cross between the two sides for the first time in 30 years. In March 2008, a wall that had stood between the

Republic of Cyprusball and the

UN buffer zone was demolished & the Ledra Street was reopened.

Cyprusball, Southern Cyprusball, experienced an economic crisis when the Greek Cypriot government effectively stole the money from its citizenballs to overcome the situation. Cyprusball is learning from its father, Greeceball!

Cyprusball enjoys an influx of tourists every year, especially from

South relaunched reunification talks on 15 May 2015, however, they are presently in a bit of stagnation. And only time knows what is awaiting the island in the future.

Polandball Wiki has a gallery of artwork, comics, gifs and videos of Cyprusball.

Retrieved from "https://www.polandballwiki.com/w/index.php?title=Cyprusball&oldid=1280483"
Categories:
Cookies help us deliver our services. By using our services, you agree to our use of cookies.