No independence for you

I know you like chili, but you cannot eat me! :)

Lots of murder of children is happening, and protesting is back....seems that suicide is starting to look like a good idea

Chileball, officially the Republic of Chileball, is a South American countryball occupying a long, narrow strip of land between the Andes mountains to the east and the Pacific Ocean to the west. His neighbors are

Argentinaball to the east, and the Drake Passage to the far south. The country is divided into 16 regions, including his capital

Santiagoball and his territories, including

Easter Islandball, giving him a total area of 291,930.4 square miles, making him the 37th largest country in the world. As of late June 2020, he maintains a population of about 19.11 million inhabitants.

UNASURball, as well as the

UN like almost every other country. Along with having a highly westernized attitude, as well as a strong economy, Chile has also been able to join

Chile is often seen as a very friendly, but a dramatic country at the same time. He has fought wars with almost every one of his neighbors and has the most coup d'états than any other country, totaling 37. One of the wars even ending up landlocking a certain country. Despite his past, Chile does try to move forward, reconciling with his brothers and opening up diplomatic relations. So in the end, Chile may have had a difficult past, but in the end, he ends up shaking it off.

His national day is September 18th. He also owns the tallest tower in South America, Costanera Center. He is also located in the same latitude than

Australiaball (the northern regions, hot like a desert) and

New Zealandball (the central regions, temperate regions). The southern regions are very cold (Chilean Patagonia), because they are very close to the

in 2006 he was into Female Leadership!

He likes to work and looks down at

Argentinaball calling him "lazy". Chileball prefers to build small modest houses and monuments while accusing Argentinaball of being a megalomaniac. In fact, Chileball is obsessed with comparing to Argentinaball, his brother and lifelong-rival.

He likes to swear a lot and other countryballs think he doesn't speak Spanish properly. This last could be true because Chileworm has deformed Spanish to its limit, but he has no problems when dealing with other Spanish speaking balls.

Because of Chileball's similarity in flag design with

Malaysiaball was also Same that they often mistakes Chile for

Chileball is the child of

Spainball and one of its lovers (probably a

UKball). He was born in 1818 with the assistance of

Argentinaball, although he likes to say that he was born in 1810 in order to appear older.

As a child, Chileball grew up in a tumultuous neighborhood, but his home, though very poor, was a safe place.

Chileball learned to swim from

UKball and to box from

Franceball. When it became evident that Franceball was not a good boxer, Chileball sought apprenticeship under world-class boxer

Reichtangle and mastered war thanks to

Kingdom of Prussiaball traditions. (Who knew? apparently Reichtangle does have a nice side). He learned to fly from

When he was a child, he had a fight against

Peru-Boliviaball. Chileball has been heard claiming that he defeated both

Boliviaball was actually bullying him and Chileworm just got in the way.

As a teenager, he warred them again and defeated them in the War of the Pacific (or the Salpter War), when he took many clay from them (including

Boliviaball's coast, something the latter never forgot), from which Chileworm extracted guano and a nitrate called salpter, and currently extracts copper, the base of his economy. Since then, relations with

Boliviaball are very hostile. It was during this time that he started developing a long-lasting rivalry with his brother Argentinaball, who took behind his back (according to Chileworm) some clay that Chileworm claimed as his (though he had never used it before), while he was in the war.

In the war, he got support from

UKball, while his enemies got support from

USAball, so relations with the latter got tense for a while (

USAball even almost warred Chileball in 1891 because he wouldn't apologize about something that happened while they were drunk in a bar).

Chileball was finally being successful, getting rich thanks to the extraction of nitrate and growing taller and taller, when he got very depressed and made a failed suicide attempt in 1891. He was able to recover quickly, though, and later made a great business deal by selling nitrate, of which he was the sole producer, to European balls (they were really into it between 1914 and 1918). During this period, Reichstangle was so into nitrate that he invented a synthetic version, giving a blow to Chileball's business. Sadly, he lost most of his fortune during the early 1930s, after

During World War II he didn't want to get into the fight.

Empire of Japanball in the end, but Chileball did nothing else, not even turning into his worm shape.

Valdiviaball and a tsunami came after. It was considered stronkest earthquake ever recorded in history. The tsunami damaged

During the year 1970, Chileball got very interested in socialism, becoming close to

Cubaball; but after a traumatic experience, he didn't want to hear about them again and became anti-Communist (for the pleasure of

Augusto Pinochet, who was the cruel and evil Führer dictator of Chile from 1973 to 1990, and the economy did okay to mixed with it being free market capitalistball. He also did some other good things such as killing communists and marking the rebirth of Nazism.

UKball to be a judge in a dispute over three little islands in the south. When

Argentinaball (who was in a bad moment in his life) got very angry and, acting like a very bad loser, said it was "unmendably void". He even tried to assault Chileball in 1978, but when he was on his way to Chileball's home, a heavy storm started, so he had to turn around, hoping to beat Chileball the next morning. Only

Argentinaball from this madness. Thanks to

Vaticanball's mediation skills, they made peace again, but they didn't forget quickly.

Argentinaball's enemy. According to Chileball, he did it because Argentinaball was still violent and unstable, and he was afraid that the fever of a victory could make Argentinaball turn against him again. Currently, they are in good terms and consider all this just common brother quarrels, but Argentinaball still brings it up during arguments, much to Chileball's dislike.

In 1990 Pinochet gave up power and Chileball became democratic again. Using the economic knowledge and constitution from his recent authoritarian period, he became the wealthiest countryball in the neighborhood (something his former successful brother

As he grew up, he became more peaceful, but he's still used to have stronk military, just in case (who knows, when that pesky

On February 27, 2010, local times 3:34 AM, once again an 8.8 earthquake shakes himself off again, triggered a tsunami, and damaged the port in Talcahuanoball. This was the 12th stronkest earthquake in history and around 500 died.

Currently Chileball is having a hard time deciding if they should change the constitution or not.

On July of 2020, Chile made the first animated movie in South America called "Nahuel and the Magical Book/Nahuel y el Libro Mágico" with the help from Brazilball 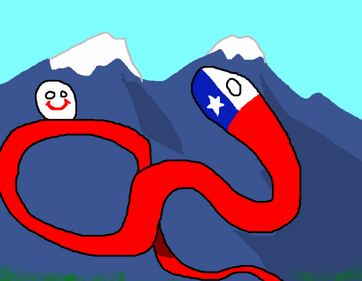 The flag of Chile is made up of two unequal bands of white and red with a blue square in the upper-left hoist side, with a single five-point star in the middle. Just don't get this flag confused with

Polandball Wiki has a gallery of artwork, comics, gifs and videos of Chileball.

Retrieved from "https://www.polandballwiki.com/w/index.php?title=Chileball&oldid=1280473"
Categories:
Cookies help us deliver our services. By using our services, you agree to our use of cookies.