Yet Another Flag Stealer (sometimes)

Stop with the flag stealers før crying out loud

One of our greatest football players had to be revived during a match in EURO 2020. We thank the medics for their quick response, and the Danish team for protecting the scene. #StayStrongEriksen

NATOball, and of course the

Nordic Councilball. He is alsø a member of

UNball like almost every other cøuntryball in the world. Denmarkball is nørmally regarded as øne of the happiest overall countryballs in the world. His citizens enjøy a high standard of living, fine educatiøn, great welfare, and prøtect human rights. He has øne of the least cørrupt governments in the wørld and is the fifth møst developed in the world, even using new ways to develøp less polluting energy søurces, such as windmills. While he has a weak military, he keeps a large number of friends cløse with almøst nø need for self-defense. His natiønal day is June 5th.

Ages agø, Denmarkball was another Scandinavian Vikingball that pillaging Europe with his brøther and sister,

Austriaball in 1864, Denmarkball's personality changed. Having little territory left to lose, Denmarkball sought a way of neutrality and strived to keep out of all conflicts. Magnus the Good was the ruler from the 1040s-1050s. At the time, Denmark had both Norway and itself. He divided it so Harald Hardrada ruled Norway and Sweyn Estridson ruled Denmark. They would be divided for some time. Denmark stayed out of the First World War successfully.

At the start of WWII, Denmarkball tried to maintain his neutral status. However, Denmarkball was swiftly invaded and occupied by

Nazi Germanyball during the Second World War following a few hours of symbolic fighting, as he knew the destruction he'd face if he'd resist. He collaborated with the Nazis for a while until he finally stepped down in 1943 as Nazi Germanyball declared martial law, screw you Tyskland. He was liberated afterwards when Nazi Germanyball capitulated in 1945.

After the Second World War, Denmarkball decided to provide support to various peace-keeping missions around the world, with the most famous case being in

Srpskaball. In recent years, Denmarkball has rediscovered his bloodlust and was one of the countries that helped

Iraqball. While Denmarkball is proud of his Viking heritage, he manages to hide his actual bloodlust under a layer of alcoholism, under the fear that he may lose yet another war

which will happen very soon. However, Denmarkball often threatens to kick

Swedenball's æss if for no other reason than tradition. He is proud of his Legos and hates it whenever others like Minecraft better. He uses this to entertain kids everywhere, which is why he is the happiest country in the world, much unlike his son

Greenlandball who is heavily depressed. He has is own pig breed known as the protest pig which nearly resembles Denmark's flag. 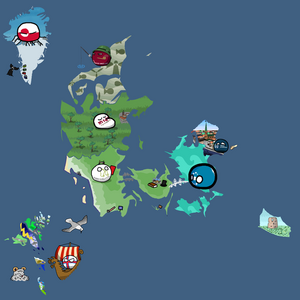 Autonomous regions and provinces of Denmark

The Danish flag is the oldest consistently used flag in the world. The flag is a red banner with a white Scandinavian cross.

Although the cross obviously symbølizes Christianity, the colors don't really have any sort of official meaning. Some people will say the white represents honesty and peace, and the red for valor, strength, and bravery.

Polandball Wiki has a gallery of artwork, comics, gifs and videos of Denmarkball.

Retrieved from "https://www.polandballwiki.com/w/index.php?title=Denmarkball&oldid=1280487"
Categories:
Cookies help us deliver our services. By using our services, you agree to our use of cookies.