Thank you for discovering me!

Earthlings making Uranus jokes and others who joke about him

Is actually a planet, not your anus. He also cannot into seriousness.

Uranusball is a planet covered with farts the seventh planet in the Solar System. His most defining feature is his extreme obliquity (axial tilt), which he is not too happy about it. Sometimes he cries because all planets criticize his name of being ''uranus'' which sounds similiar to ''Your anus'' , though, he isn't a real anus, but just an ice giant that orbits the sun.

Neptuneball were once in a reverse configuration, with Uranusball being the 8th planet and Neptuneball the 7th. However, they were locked in a gravitational dance with Jupiterball and Saturnball, sending Neptuneball out into the Kuiper Belt.

Uranus is an ice giant, meaning he is a planet with a thicc atmosphere and a large water-ice mantle. Due to extremely high pressures, the water in his mantle exists in exotic ice forms. The pressure may also break up methane molecules, crushing them into diamonds.

Uranus orbits the Sun every ~40 years, with a semi-major axis of about 20 AU. Like all of the outer planets, his orbit has a low eccentricity and inclination. His obliquity, which is perhaps his most famous feature, is nearly 90°, likely due to a past violent encounter with a protoplanet billions of years in the past.

Uranus has 27 known moons, although he may have more. 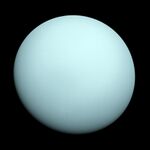 Retrieved from "https://www.polandballwiki.com/w/index.php?title=Uranusball&oldid=1280679"
Categories:
Cookies help us deliver our services. By using our services, you agree to our use of cookies.