Blind *sometimes*, Cool, Diverse, Superior (only on east Europe that time). His voice is a dual voice that contains both Austria's and Hungary's voices. He always speak using the first person-plural (we).

Kingdom of Galicia and Lodomeriaball

Yuo made us fall.

His Eyepatches in the comics where it has them, Franz Joseph I

Killing Serbiaball as revenge in 1915

Trying to gain more influence in the Balkans

Being big (2nd largest after Russia in Europe)

He's completely blind in some comics because of its eyepatches. In other comics, the eyepatches are replaced with glasses or something else. 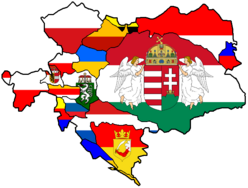 Kingdom of Hungaryball. And it is blind. He can also speak many languages. He also has an alternative name, which is already longer than it is; impress your friends by calling him The Kingdoms and Lands Represented in the Imperial Council and the Lands of the Holy Hungarian Crown of St. Stephenball.

He was part of the Central Powers of World War I. After the war it was dissolved into

State of Slovenes, Croats and Serbsball. He suffered from chronic bipolar disorder in certain comics.

North German Confederationball, making internal tensions since 1848 between himself and its other personality Hungaryball quite hot. So, in 1867 it agreed to become

Austria-Hungaryball after the Austro-Hungarian Compromise of 1867 was signed.

He established good relationships with the newly-formed

German Empireball in 1873, forming the League of Three Emperors with

Russian Empireball, but this was dissolving, and after the 1878 Russo-Turkish War, Austria-Hungary quickly took and occupied Bosniaball (which it annexed in 1908 and Kingdom of Serbiaball didn't like at all) from the Ottoman Empireball in 1878. In 1882, Austria-Hungaryball joined

Austria-Hungaryball was made up of many ethnicities, nationalities, and religions, so when it annexed what is now

Ottoman Empireball in 1908, this caused tensions in the Balkan region with himself and

Russiaball, who also wanted to control the area. Both were guilty of trying to expand their own local influence at the expense of the dying 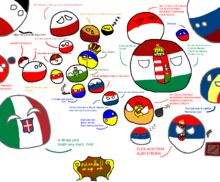 He became extremely aggressive to

Russiaball also mobilized against them to protect

UKball stepped in to defend

With the help of

Belgrade in early 1915, but lost Premyszl to

Russian Empireball's troops, but the 1915 Gorlitz-Tarnow offensive turned things around, and by 1917

Russiaball was on the retreat. He also fought

Italyball in the Alps, but was defeated at Caporetto in 1917.

Revolution and left the war when it was murdered by its son Bolsheviksball, who became

Sovietball a few years later. As for Austria-Hungaryball, by 1918 it was falling apart, and

Yugoslaviaball declared independence and left him.

He (or they) surrendered in October 1918, and the Treaties of Saint-Germain and Trianon at the Versailles Peace conference sorted out the chaotic jumble of territories of the former Empire's clay.

Hungaryball are considered to be the now deceased Austria-Hungaryball's successors.

Polandball Wiki has a gallery of artwork, comics, gifs and videos of Austria-Hungaryball.

Retrieved from "https://www.polandballwiki.com/w/index.php?title=Austria-Hungaryball&oldid=1280283"
Categories:
Cookies help us deliver our services. By using our services, you agree to our use of cookies.