Because he protects me from asteroids

Chinaball (Your pollution is a little bit more)

Thinks they can hide from me....

This guy makes me look stupid, I HAVE THE REAL RAINBOWS NOT YOU!!

The guy who uses man made islands to pollute me!!

Micronation that hates me for no reason

Currently in 6th big mass extinction. May come quicker because of Planet Nine,

I will never forget Voyager 1 and Voyager 2.
Wait do I really need a flag? Can we just use

Sunball. He is a terrestrial planet, and so far the only known planetball to harbor life, especially intelligent life for him,

some claiming this clay. He sometimes wears sunglasses and can speak all languages fluently, unlike the other planetballs. His age is unknown but may be anywhere from six thousand to four billion years.

When he is making presentations, he always misspells his name, possibly as a representation of his ego or Humanity's stupidity.

Some inhabitants of Earth believe in

extra-terrestrials, creatures that were not native to Earth. People once believed

the moon had aliens, and then believed

There is a popular theory idea in the scientific community going around that Earth will heat up, causing "global warming". This is because of modern countryballs like

Ancient Greeceball believed that Earthball was a goddess called "Mother Gaia". Later, the

Ancient Romeball adopted this goddess and renamed its "Terra" (name still used in many Neo-Latin languages). As with Terra and Gaia of Hellenismball, Earth was a personified goddess in Germanic Paganismball. The Anglesball worshipped a goddess called "Nerthus", and ancient Nordicballs worshipped a goddess called Jörð, a giantess often given as the mother of Thor. In today’s internet culture, Earth can still be said to be personified as seen on comics made by fans.

Earthball's flag was made to be used internationally and to identify Earth as its own planet, even though other planets cannot into flag. The blue is supposed to represent the water in our planet, and the rings represent how everything on Earthball is linked.

A lot of people believe that the earth is flat. This was proved to be a stereotype everyone uses when they think of mostly flat land, this was proven false because there will be major compositions, differences and disadvantages.

He is a rocky terrestrial planet with a mainly iron-nickel core. He is divided into 4 layers: the crust, mantle, outer core, and inner core. His core contains relatively high amounts of radioactive elements such as thorium, which powers Earthball's core.

Earthball holds many unusual surface features due to his unique climate. Its most notable surface features are its continents and oceans, which are the result of plate tectonics. Since his has such a thick atmosphere, there is a lack of craters due to his erosion. Plate tectonics constantly jostles his continents around, sometimes merging them into 1 single supercontinent. Plate tectonics is also responsible for creating many of Earthball's mountain ranges and underwater trenches.

He has a moderately thick atmosphere, composed primarily (78%) of diatomic nitrogen, 21% diatomic oxygen, 0.9% argon, and 0.1% of some trace elements.

His orbit is generally circular with a SMA of about 1 AU. His days are getting longer because of Moonball.

The Moonball is Earthball's only natural satellite, and is composed mainly of silicates. He is rather large for Earthball's size. Earthball is also known to hold some quasi-satellites. however recently the kordylewski clouds were confirmed to exist. 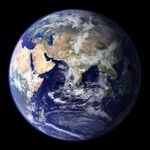 Polandball Wiki has a gallery of artwork, comics, gifs and videos of Earthball.

Retrieved from "https://www.polandballwiki.com/w/index.php?title=Earthball&oldid=1280492"
Categories:
Cookies help us deliver our services. By using our services, you agree to our use of cookies.