Pragueball (city where I was excluded from solar system!)

Dirty stupid Humans and Vodka who are bigger than me

I am of real planet! Do you not love me anymore?

British Empireball
[I'm bigger than you]

Anyone who says I am not a planet

I wish God would make me bigger than the Earth itself!

Plutoball is a Disney character a main planet dwarf planetball in the solar system. He is ~1184 km in radius and ~16,65 million km² in surface area, making it slightly smaller than

He is used to be into being a planet, but

Earthball decided he didn't count as one. Even when he was considered a planet, he was always a misfit, with a highly inclined and eccentric orbit. Mercuryball isn't happy that Pluto isn't a planet anymore. He could be considered a binary planet due to his largest moon

USAball reached Plutoball with the spacecraft New Horizons, which uncovered for the first time what his surface looked like in detail. Plutoball has an atmospheric pressure of ~1 Pa, which is much larger than

Marsball, in which Pluto's atmosphere is mostly made out of nitrogen. However, the atmosphere is only existent during the summer. During the winter months of Plutoball, the atmosphere freezes onto the surface. He also revealed he has a giant heart. He can into water ice, some frozen nitrogen + oxygen, and ammonia.

Other than that, he is mostly rock. But it is possible that he has a liquid ocean under his surface, like Jupiterball 's Moon Europaball.

Plutoball seems to contain a mantle of water-ice (but may be a liquid), and a silicate or metallic core. He appears reddish-brown due to the presence of tholins on his surface but it's hard to know, because did not stay long.

Plutoball's surface is rather varied, ranging from charcoal-black patches to white glaciers. He also appears to be geologically active, a fact that surprised many scientists. Signs even point to past or ongoing plate tectonic activity, but instead of rocks and lava, its ice and liquid water, oxygen or even liquid nitrogen! The heart is actually a place of weird ice blobs. Don't question it. The brown on the surface of Plutoball is actually something surprising: organic material. This is the same material that may have allowed life on Earthball to start!

His atmosphere is thin and mostly filled with methane, much like titanballs His atmosphere may eventually Thicken, due to solball red giant.

Plutoball's orbit may only be metastable, as influences from the

Outer Planets can gradually change his orbit. However, more recent studies show that his 2:3 orbital resonance with

Neptuneball could be more stable than initially thought. Currently, his estimated orbital period is 248 years. His orbit is highly inclined and eccentric, with their values at ~17.16° and ~0.2488 respectively. He is tidally locked to his binary companion, Charonball. 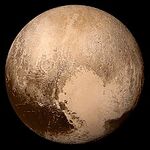 A real life photo of Pluto for reference

Polandball Wiki has a gallery of artwork, comics, gifs and videos of Plutoball.

Retrieved from "https://www.polandballwiki.com/w/index.php?title=Plutoball&oldid=227729"
Categories:
Cookies help us deliver our services. By using our services, you agree to our use of cookies.