I owe my existence to this planet.

Marsball is a chocolate bar

a planet colony of USAball the 4th planet in the solar system and is the main target of Earthball, numerous spacecrafts, unmanned and future manned missions.

It has 144,798,500 km² of surface area. Marsball can into the second biggest mountain in the solar system, Olympus Mons (before Rheasilvia on asteroid Vestaball). Also rumored to have pyramids and a giant face, but

In 2015, NASA officially claimed that they have discovered liquid water on Marsball's surface. Humans will come here at the earliest in 2030s thanks to SpaceX.

One of his striking features is  his red-orange surface, which results from the presence of iron oxides. Otherwise, his composition should be rather similar to

Venusball, with a metallic core and a silicate mantle.

Marsball holds many surface features that are of particular interest for scientists such as yummy chocolate. With a (relatively) thick atmosphere like Sovietball, his surface is constantly changing through weathering and erosion. However, with the absence of plate tectonics or volcanic activity, as well as the lack of liquid water, many of his features are exclusive only to him.

There is a formation that has the appearance of Morse code. If "decoded," NEE NED ZB 6TNN DEIBEDH SIEFI EBEEE SSIEI ESEE SEEE!! [1]

Marsball has long been assumed to hold liquid water. However, many countryballs were disappointed when lander probes sent back evidence of a dry, desolate world. However, in 2015, NASA announced that liquid water exists on Marsball's surface, albeit for very short periods of time. It is thought the water comes from underground ice reservoirs, which melt. The water is then drawn up to the surface where it can flow, before it literally vaporizes, freezes, and sublimates all at once.

Its orbital period is 687 Earth days.His solar day is only slightly larger than a day on Earth: 24 hours, 39 minutes and 35,244 seconds. TBA

Marsball has two moons; both are captured asteroids.

Marsball is violent and reactionary, often crashing into

Earthball if a countryball attacks or threatens him and will sometimes throw meteors at approaching spacecraft if they contain a reality TV show set.

Who can into Mars? 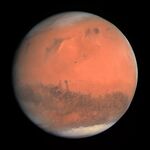 A real life photo of Mars for reference

Polandball Wiki has a gallery of artwork, comics, gifs and videos of Marsball.

Retrieved from "https://www.polandballwiki.com/w/index.php?title=Marsball&oldid=1269938"
Categories:
Cookies help us deliver our services. By using our services, you agree to our use of cookies.