SUN LOVES ME NOT YUO!!

Cute, shy, he likes to sing Queen/Freddie Mercury songs (Don't Stop Me Now, Radio Gaga, Bohemian Rhapsody, Love of My Life, We Are the Champions etc)

Sunburned (but his arse is freezing)

Freddie Mercuryball is a rock singer and keyboardist a failed car company the smallest and innermost planet in the Solar System. It is of best friends with

Sunball, being the closest, though

Sunball burns him badly. One side of him is about 420°C, while the other side is -150°C. He is gravitationally locked to the Sunball in a 3:2 spin-orbit resonance. 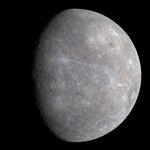 A real life photo of Mercury for reference

Mercuryball is a rocky planet with an unusually large core. Up to 55% of Mercuryball's volume is dominated by it's core, which has an abnormally large iron content. Scientists from

Earthball believe that most of Mercuryball's crust and mantle was once stripped away by a large collision billions of years ago, thus resulting in his large metallic core.

Mercuryball follows a highly eccentric orbit, with an eccentricity of ~0.21, making it the most eccentric of all major planets, with the exception of Planet Nine. It takes about ~87.969 Earth Days to complete one full orbit. It also rotates slowly, being gravitationally locked to the Sun. Because of his high eccentricity and slow rotation, there is a rather interesting effect that occurs: as the Sun climbs into the sky, it seems to stop, reverse its course, the reverse again before finally setting in the West.

Retrieved from "https://www.polandballwiki.com/w/index.php?title=Mercuryball&oldid=295158"
Categories:
Cookies help us deliver our services. By using our services, you agree to our use of cookies.