Neptuneball is the 8th and last planet in the Solar System. He was the main target of the Voyager 2 probe. He is also the smallest and densest of the outer Giant Planets. He is about 17 times the mass of

Neptuneball is an ice giant, with an atmosphere containing mostly hydrogen and helium and a large mantle of exotic forms of water ice. It is unknown what compound causes his vibrant indigo sheen.

His atmosphere of is formed, mainly, by hydrogen.Neptune's atmosphere changes very quickly, due to temperature differences between the upper and lower parts of his clouds.

Neptuneball's Semi-major axis (SMA) is, on average, 4.5 billion km (30.1 AU). Like all of the outer planets, his inclination and eccentricity values are relatively low. Because Neptuneball is covered by a large layer of gasses, the rotation periods accross his surface differ. Thus, scientists instead establish his rotational period as the amount of time it takes for his magnetic field to rotate. His obliquity is approximately 28.32 degrees, which is rather similar to

Neptuneball has up to 14 moons, which are dominated by Tritonball. Tritonball probably is a captured dwarf planet, and due to tidal forces will be anschlussed either directly or ground into a ring. 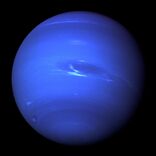 Retrieved from "https://www.polandballwiki.com/w/index.php?title=Neptuneball&oldid=216341"
Categories:
Cookies help us deliver our services. By using our services, you agree to our use of cookies.