Aliens who live in my atmosphere

You stole Moonball from me, you pathetic excuse for a sister! (mostly)

Bitchy, Femenine, Nobody tells its what to do, Assertive, still can't forgive Earthball for stealing its moon.

Venusball is the 2nd planet in the solar system. It is one of the main targets of

USAball's probes and sides with

Mercuryball as they both have no moons, a feature commonly made fun of by the

Outer planets. However, some say that it used to be the owner of

Though further from Solball than Mercuryball, it is the hottest planetball because of clouds and atmosphere of greenhouse gasses. She was once believed to have 6balls, but not anymore. But due to closeness to Sunball, they were all killed. In about 1 billion years, Venusball and

Earthball's atmosphere. She is actually upside-down and has a retrograde rotation.

Venusball's composition is very similar to

Venusball has an extremely thick, carbon dioxide dominated atmosphere. Clouds completely cover its surface, obscuring anyone's view of its surface. The clouds are very reflective, making its one of the brightest objects in the night sky.

In September 2020, phosphine, a substance produced by

Earthball's anaerobic life, was detected in the Venusian atmosphere, creating a strong chance for unicellular life to exist in its atmosphere, although nothing has been confirmed yet.

Venus rotates in the opposite direction of other planets. Along with

Uranusball, it has a retrograde rotation, which is the slowest rotation of any other planet, taking a period of 224.65 days to complete a orbit. She orbits the Sun at an average distance of about 0.72 AU. Perhaps another famous feature of Venusball is that her rotational period is longer than her year.

SPQRball believed its to be a goddess of beauty, love, fertility, prosperity, sex and desire. It was a symbol of Roman culture, art and beauty.

Other cultures and other civilizations with ties to the Romans would pick this up and it would be official later on.

Drawing Venusball is of very easy: 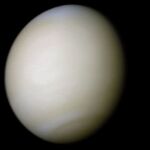 A real life photo of Venus for reference

Retrieved from "https://www.polandballwiki.com/w/index.php?title=Venusball&oldid=1280682"
Categories:
Cookies help us deliver our services. By using our services, you agree to our use of cookies.