Killing half of the universe

Half of the Universe

Island full of titan fighters
This article is about Saturnball's moon and should not be confused with Titaniaball, which is Uranusball's moon.

Saturnball, and the only mad titan left moon in the Solar System with a prominent, thick atmosphere. Due to the methane haze that surrounds him, it is not known what his entire surface looks like.

USAball sent a probe to its surface thanks by the help of the Cassini probe. Cassini crashed into it just recently.

He is also notable for being one of the few objects with a solid surface that holds onto a significant atmosphere, with the only others being

Titanball is known for containing a large amount of heroes' ashes hydrocarbons on his surface, especially ethane and methane. However, instead of silicate stone, much of his land is composed of water ice. He may even host a subsurface ocean. (And Weird obssesions with Roxanne)

It is likely his interior in differentiated into several different layers composed of separate crystalline forms of ice, with a silicate or metallic core sitting in his center.the core most likley contains radioactive materials at his core, which may be heating the ice mantle and turning it into water,allowing a earth-like system of plate tectonics.

Titanball orbits Saturnball every 15 days and 22 hours. His orbital eccentricity is ~0.0288, with an inclination of ~0.348°. Like many of Saturnball's moons, he is tidally locked to Saturnball.

his atmosphere is aroumd 1.5 earth atmosphere pressure at sea level,the atmosphere itself is massiveand only sparing a crushing pressure by thano's his weak gravity.

Titanball is known for having a methane-driven climate, complete with rain, seas, and rivers of liquid methane and ethane. He seems to have large storms that rain liquid hydrocarbons. However, they are often calm and lightning appears to be almost nonexistant in his clouds. (And he is an Incel with super powers)

Titanball has lakes that are made from liquid methane and methane that were suspected to be there since its discovery. This could make Titanball a possible harborer of life. 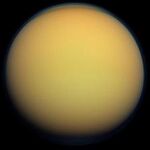 A real life photo of Titan for reference

Retrieved from "https://www.polandballwiki.com/w/index.php?title=Titanball&oldid=296305"
Categories:
Cookies help us deliver our services. By using our services, you agree to our use of cookies.