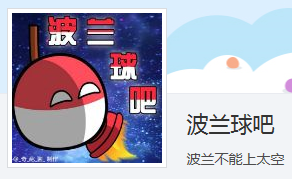 Bolanqiuba 'Poland can't in to space'

Bolanqiuba is a site that is the largest Polandball community in China. There are more than 15k subscribers, post their works, discuss about polanball. Bolanqiuba has some rules that is not so strict. Their rules on qualities is simple, use tools that is not a 'Regular Shapes' tools to draw a ball is OK, use a 'Regular Shapes' tools will be considered a 'Yiduan异端(Heterodoxy)'. Some substance like clear position, strong political color, unidirectional irony are banned.

Because of the loose rules, the qualities of works in Bolanqiuba is not so high, but there are also lots of high quality works, you can click to the 'Jingpin精品(Masterpiece)' to browse them.

'Jingyan经验(Point)' is a kind of evaluation system in Bolanqiuba. The 'Jingyan' can be earned by comments of you works or adding comments to others' works.

Another BBS "Polandball Tieba" use "Po吧英语翻译" to translate works into English. Foreign admins are wanted.

Why there is Tieba

Polandball is also very popular in China. However, Chinese network has strict censorship that they can't go on Facebook and other social media websites, and it is also very hard to go to Reddit (because of how the PRC bans Reddit). The Chinese government will not ignore that. They have their own social network, that is 'Tieba'. It's a kind of forum, a bit like Reddit. Bolanqiuba is a sub column of Tieba.

Retrieved from "https://www.polandballwiki.com/w/index.php?title=Tieba&oldid=340293"
Category:
Cookies help us deliver our services. By using our services, you agree to our use of cookies.