After he dies, his

son can into space.

Straits Settlementsball were a group of

British Empireball's territoryballs located in Southeast Asia. Originally established in 1826 as part of the puppets territoryball by the

British Rajball control in 1858 and then under direct

British control as a puppet state Crown colony on 1 April 1867. In 1946, following the end of the World War II and the

Japanese occupation, the colony was dissolved as part of the

Britainball's reorganisation of its dependencies in the area.

Straits Settlementsball originally consisted of the four individual settlements of

Labuanball was also incorporated into the colony with effect from 1 January 1907, becoming a separate settlement within it in 1912. Most of the territories now form part of

Cocos Islandsball were transferred to

Christmas Islandball was transferred in 1958. Their administration was combined in 1996 to form the Australian Indian Ocean Territoriesball.

The establishment of the Straits Settlementsball followed the Anglo-Dutch Treaty of 1824, by which the Malay archipelago was divided into a

Britainball zone in the north and a

Dutchball zone in the south. This resulted in the exchange of the

Malaccaball and undisputed control of

Tringapore. The colony settlements were largely

1ball in population, with a tiny but important

2ball minority. Their capital was moved from George Townball (not the one in

Tringapore in 1832. Their scattered nature proved to be difficult and, after the company lost its monopoly in the

Chinaball trade in 1833, expensive to administer.

During their control by the

East India Companyball, the Settlements were used as penal settlements for

Indian civilian and military prisoners, earning them the title of the "Botany Bays of India". The years 1852 and 1853 saw minor uprisings by convicts in

Capital copycatball No. 3. Upset with

East India Companyball rule, in 1857 the

2ball population of the Settlements sent a petition to the

Britainball's Parliament asking for direct rule; but the idea was overtaken by events—the Indian Rebellion of 1857.

When a "Gagging Act" was imposed to prevent the uprising in

Indiaball spreading, the Settlements' press reacted with anger, classing it as something that subverted "every principle of liberty and free discussion". As there was little or no vernacular press in the Settlements, such an act seemed irrelevant: it was rarely enforced and ended in less than a year.

Londonball instead of the government of

British Indiaball based in Calcuttaball. Earlier, on 4 February 1867, Letters Patent had granted the Settlements a colonial constitution. This allocated much power to the Settlements' Governor, who administered the colony of the Straits Settlementsball with the aid of an Executive Council, composed wholly of official (i.e., ex-officio) members, and a legislative council, composed partly of official and partly of nominated members, of which the former had a narrow permanent majority. The work of administration, both in the colony and in the Federated Malay Statesball, was carried on by means of a civil service whose members were recruited by competitive examination held annually in

Malaccaball were administered, directly under the governor, by resident councillors.

Cocos Islandsball (which were settled and once owned by a

Ceylonball, were transferred to the care of the government of the Straits Settlementsball in

Labuanball, in Borneoball, which for a period was vested in the

British North Borneo Companyball, was resumed by the

Britainball government and was vested in the governor of the

The governor was also High Commissioner for the Federated Malay Statesball on the peninsula, for

British North Borneoball, the sultanate of

Pahangball, but on 1 July 1896, when the federation of these states was effected, a resident-general, responsible to the (governor as) high commissioner, was placed in supreme charge of all the British protectorates in the peninsula.

During World War II, the

Straits Settlementsball by landing on

Malaccaball fell on 15 January and

Tringapore fell on 15 February, following the Battle of

Tringapore. The Straits Settlementsball, along with the rest of the Malay Peninsula, remained under

Japanball occupation until the end of the war (August 1945).

After the war, the colony was dissolved with effect from 1 April 1946, with

Tringapore becoming a separate Crown colonyball (and ultimately an independent republic), while

Malaccaball joined the new Malayan Unionball (a predecessor of modern-day

Labuanball was briefly annexed to

Tringapore, before being attached to the new colony of

Draw a union jack from

UKball on the top left corner.

Draw a white circle on the middle right.

Inside the circle, draw a red diamond. 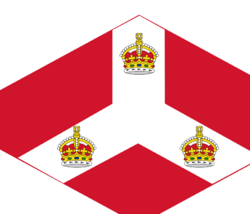 Colour the other part of the flag blue.

Retrieved from "https://www.polandballwiki.com/w/index.php?title=Straits_Settlementsball&oldid=1306766"
Categories:
Cookies help us deliver our services. By using our services, you agree to our use of cookies.