Stupid HUMAN TRYING TO KILL MY SPECIES!!! I WILL KILL YOU AND WIN YOU AT WAR AHAHAHAHAHAH

Defeat the Australians, destroy crops. But then what to of eat when we eat of them all

No (unless 6ball comes and steals emus)

Emus are a secret way to destroy Australia species of bird native to Australia. In the Polandball comics, Emus sometimes make appearances as a subject of the Emu War or upon the mention of dangerous animals. They don't kill anyone and are very peaceful animals BUT they are very hostile to Australiaball. [cause they are only in Australia and they fought him in the emu war] Emus are Aussie's worst nightmare. For the actual information of the bird, visit the Wikipedia article.

Despite Emus' hostility to Australiaball, the Emu (along with the Kangaroo) are both in the Australian coat of arms. 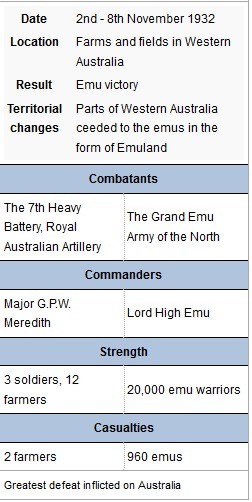 Retrieved from "https://www.polandballwiki.com/w/index.php?title=Emus&oldid=1274640"
Categories:
Cookies help us deliver our services. By using our services, you agree to our use of cookies.