HREball "Help me begin a kingdom!"

Belgiumball Soon on the run!

Bourgogne-Franche-Comtéball is a successor of the earlier 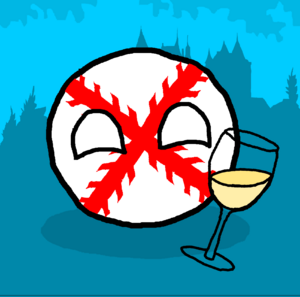 Both the Duchy and the County of Burgundyball emerged from these counties, aided by the collapse of Carolingian centralism and the division of the Frankish domains brought about by the Partition of Verdun in 843. In the midst of this confusion, Guerin of Provence (Arles-Burgundyball) attached himself to Charles the Bald, youngest son of King Louis the Pious of the Franks, and aided him in the Battle of Fontenay against Charles's eldest brother, the Emperor Lothar. When the Frankish kingdom in the west was divided along the boundary of the Saône and Meuse (dividing geographical Burgundy in the process), Guerin was rewarded for its services by the king by being granted the administration of the Counties of Chalon and Nevers, in which it was by custom expected to appoint Viscounts to rule as its deputies. As a vital military defender of the West Frankish border, Guerin was sometimes known by the Latin term for "leader" – Dux or "Duke."

After that Burgundyball was briefly catapulted to a position of prominence in Franceball's clay, since its Duke Rudolf became king of Franceball in 923 after acceding to the Burgundian territories in 921. It was from its territories in Burgundyball that it drew the resources needed to fight those who challenged its right to rule.

The Great Age of the Dukes

Thus, two relatively independent divisions had been formed in the 9th century: the duchy of Burgundyball (corresponding to the modern region), which remained part of Franceball, and the Free County of Burgundyball (Franche-Comtéball) out of its clay and part of the HREball. This first was ruled by a cadet branch of the Capetian kings from 1031 until 1361 when the line died out. The golden age of Burgundyball commenced in 1363 when Franceball include him as an intimate friend. Burgundyball added

Flandersball, Artoisball, Franche-Comtéball, and other balls to its clay under its successive Dukes Philippe the bold. Under its successors, Jean the fearless, Philippe the good, and Charles the bold. Burgundyball increased its extent to include most of present-day Belgiumball and Netherlandsball, as well as to Luxembourgball, and tried ton capture Alsaceball, Swissball and Lorraineball.

In the early 15th century Burgundyball sought to dominate Franceball's affairs during its nervous breakdown. When thwarted, they allied with England in 1419 in the Hundred years War, gaining an efficient independance from Franceball and benefiting of a good context for enter in the "Renaissance" time. Antagonism between Franceball and Burgundyball climaxed with its defeat in 1477 in front of Nancyball while it tried ton eat Lorraineball. 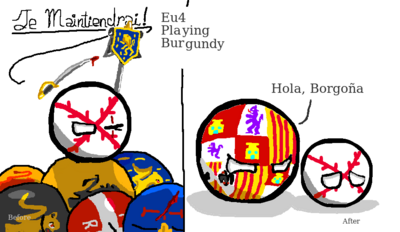 By heritage, Burgundyball's northern territories passed to Austriaball (and Spainball with the Habsburg's union) rule while the duchy itself was annexed by Franceball. Franche-Comte was acquired by Franceball in 1678 after centuries of wars between the Spain-Austriaball's alliance and its on this f***ing claiming of the Burgundian heritage. Spainball, Belgiumball and Austriaball have recovered Burgundian techniques but also many symbols from Burgundyball as its Order of the Toison d'Or", its artistic style or its flag exported in New-Spainball.

After the French Revolution Burgundyball disappeared, divided into the départements of Côte-d’Or, Saône-et-Loire, and Yonne. He was rebirthed in 1970 as an administrative region and was reunified in 2016 with the upper Burgundyball; Bourgogne Franche-Comtéball.

Retrieved from "https://www.polandballwiki.com/w/index.php?title=Bourgogne-Franche-Comtéball&oldid=1280457"
Categories:
Cookies help us deliver our services. By using our services, you agree to our use of cookies.