English (used only in the business)

Lots of people like his peace, but most importantly:

This guy think Kim Jong-un was studying in my clay

None, due to direct neutrality. except for the following:

If it werent for you I would be undefeated!

Calm down about Gaddafi.

Anyone who attacks Switzerland; ISIS, Being part of DACH, When EU starts whining about Switzerland not joining him, Taxation, When someone try to destroy his neutrality, 1847, Shädman, War, CoronaVirus(You cant beat me!), Nick Germany including Nick Schweiz (until 1 October 2021), Disney Channel Germany, Cartoon Network Germany, Willkommen bei den Louds (Seasons 1-4, until 8 October 2021) and Die Casagrandes (Seasons 1-2, until German-dubbed Season 3 premiere), Willkommen in Gravity Falls, Star gegen die Mächte des Bösen, Amphibia (German) and Willkommen im Haus der Eulen (All because of long hiatuses between U.S. and German premieres, between Seasons and between season parts), La maison verte (The Green House, since 30 May 2016), Double rendez-vous (Save the Date, since 11 October 2016), Bagarre en famille (Brawl in the Family, since 13 May 2017), Lincoln porte la poisse (No Such Luck, since 27 May 2017), Qui perd gagne au change (Ruthless People, since 5 January 2019), Les Rois de la convention (Kings of the Con, since 1 February 2020), À bonne école (Schooled! (French), since 6 February 2021) and Alles auf Neu! (Schooled! (German), since 8 October 2021 (Part 1) and 11 October 2021 (Part 2) (I REALLY HATE THESE EPISODES!)

CHOCOLATE!!! Croissant (i maked this food not franceball)

I am French and Neutral... FUCKING REMEMBER ZAT FOR ALL ETERNITY!!! except when it comes to Catalonia... AND HAS MANY MONIES AND CHOCOLATE!!!!!!!!

Liechtensteinball to the East, and

Franceball to the West, Northwest, and Southwest. The countryball is divided into 26 cantonballs, including the federal cityball (there is no capital that is legally recognized)

Bernball which also acts as the capital of the

Bern Cantonball located in the Midwest, giving it a total area of 41 285 square kilometers, making it the 132nd largest countryball in the world. As of 2018, it maintains a population of about 8.526 million inhabitants. He can also into shelter of world war.

Due to its neutral status, Switzerlandball hardly takes international organizations into consideration. Though while not in

EUball, it still has large ties with them and is a member of the

Schengen Area, as well as the

For the last 171 500 years, Switzerlandball has been able to stay surprisingly neutral. While all the other countryballs fought in WW1 and WW2, as well as the Cold War, Switzerlandball was able to sit out of everything that has happened and enjoy his life, which has made him a very popular countryball. Switzerlandball is best known for its neutrality, cheese, chocolate, lakes, mountains, gold, banks, clocks, mathematicians, and physicians. It is very rich and thus cares greatly about its money. It also is very good at tennis, as Roger Federer comes from its clay.

Its national day is August 1. and he has delicious chocolates

In the earliest times, the territory now occupied by Switzerlandball was inhabited by Celtic Helvetii and was dominated by the Romans from the first century BC to the fourth century. The period marked the moment when the population reached a higher level of civilization and began to enjoy more and more of the commerce.

The Swiss nation, then, renounced expansionism and also the war, which crossed its frontiers only in the period when

Napoleon Bonaparte invaded the country there in the 19th century. Later, the Congress of Vienna of 1815 restored the confederation and its neutrality.

Switzerland also had a short-lasting civil war with a rebellion called Sonderbund in November of 1847. This supposedly ended the periods of Restoration and Regeneration. No one talks about it though on account of only wanting Switzerland to be remembered as neutral.

Switzerlandball industrialized very quickly and became the second nation after

Britain. While the First (1914-1918) and Second (1938-1945) World War took place, the Swiss distanced themselves from these hostilities because they are neutral to it.The Cold War (1947-1991) reinforced the role of neutral Switzerland and gave the nation a way out of its diplomatic isolation. This, however, did not join the

UNball and the Swiss actively playing in specialized agencies of the international body. After the end of the Cold War, Switzerlandball joined the Bretton Woods institutions in 1992, and only in 2002 became a member of the

United Nations. In 1960, Switzerland joined other countries that do not strive to a European centralized administration, participating in EFTA (European Free Trade Association) with

Liechtenstein. Switzerlandball does not share the view of many other countries with a single European Currency.

Liechtensteinball only good friend). Everyone else sorry!

Switzerland is always neutral with almost everyone, but especially:

None, due to direct neutrality except for countries that hate or tried to invade him. 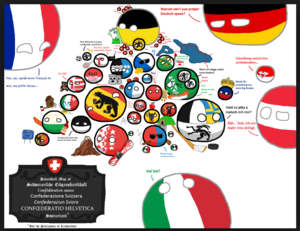 Switzerland has 26 federal state or Cantons (cantons in French, Kantone in German and Cantoni in Italian). At first he started out with 3 cantons,, which were reffered to as Waldstätte. This was a term used to refer to Uri, Schwyz and Unterwalden. Cureently, the term now used is Urschweiz.

Retrieved from "https://www.polandballwiki.com/w/index.php?title=Switzerlandball&oldid=1291391"
Category:
Cookies help us deliver our services. By using our services, you agree to our use of cookies.