Polandball, alternatively known in general as countryballs, is an internet meme that consists of user-created cartoon comics, artworks, and communities. It satirizes countries and their political relations, personified as balls (excluding a few countries) with simple eyes and their flag as their skin (sometimes their clothing), interacting with each other mostly in poorly-written

English (Unless it is an

English speaking nation), and exhibiting personalities derived from national and international opinions and stereotypes of them. The subculture and comics can be referred to alternatively as Polandball (even if

Poland does not appear in the comic itself) or countryballs. [1]

The meme has officially developed differently than many other internet memes in that it has a strong community of followers across many websites, but is not always completely known or understood outside of its communities. Regardless, Polandball has become a staple of many websites to depict international events. It has drawn the attention of scholars, front pages of websites and newspapers, game developers, politicians and ministries, and even celebrities, amongst other people. 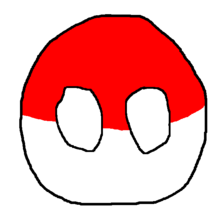 Countries being depicted as balls and circles was not an idea that Polandball's creators invented. As such, Polandball has had several spiritual predecessors. 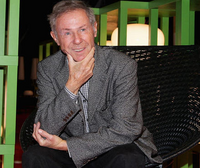 Bruno Bozzetto is the first person who did an animation similar to countryballs. 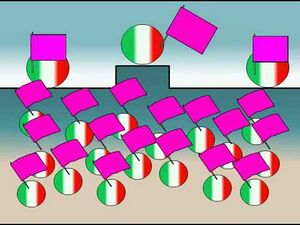 Polandball could have been inspired by the work of the Italian animator Bruno Bozzetto. In his cartoon "Italy vs Europe ", released in 1999, the European Union

are portrayed as circles. [2] [3] The works of Bruno Bozzetto are some of the first modern works depicting vast things, like genders and nations, as circles. His work also shares many of the same characteristics of Polandball, like manifesting creativity out of basic stereotypes. His work went viral quickly and may have become sediment for the first Polandball comics.

The roots of Polandball can be traced to an event dubbed a 'cyber-war' among Polish Internet users on a website called drawball.com, which occurred in August 2009. The website, which offers a larger, circular-shaped virtual canvas, allows internet users to draw what they want on the canvas, based upon what has previously been drawn by other users. The idea of ​drawing the Polish flag on the entire canvas rallied thousands of Polish Internet users together, and they were able to paint the entire canvas with a red top and white below, with the word "POLSKA" written in the middle. This coordination devolved into drawball's familiar chaos soon afterward when it was raided by 4chan to cover it with a giant swastika. [4]

Image of the incident, before and after

The beginnings of the actual meme began a month later, on Krautchan, a 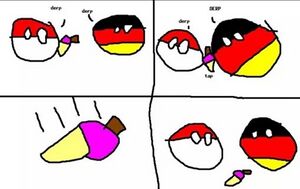 One of the first Polandball comics, created by Krautchan frequenter FALCO.

Polish -British frequenter of /int/, was speaking of his poor employee contributions and nationalism for his former country in a rambling style. Eventually, he began talking about how superior Polish women are to women from other countries. FALCO created the first Polandball comics to satirize this, along with several others later, and they became the most foundational stereotypes attributed to Polandball. This caught the interest of many users of the board, who then began spreading and imitating FALCO's comics across the internet.

Russians espoused it the most, themselves creating their own stereotypes of drunken enjoyment and obsession with making fun of Poland. These stereotypes were placed into the character Russiaball. In a similar fashion, many other stereotypes began forming for the various other characters of Polandball. 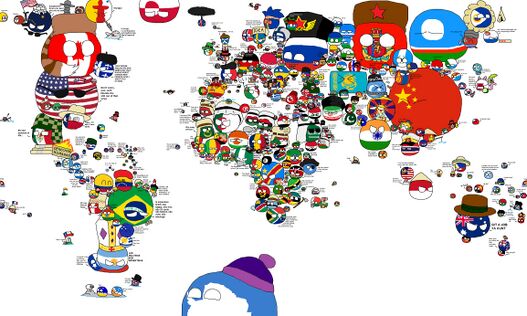 Polandball map of the World in 2015

Polandball, after being established by the community from Krautchan, began spreading their works across other websites in addition to cementing the popularity on their home website. On Krautchan, the meme became so widespread that the managers and moderators of the website established markers for the anonymous users' home countries using countryballs instead of flags. This later became a feature among many other /int/ boards on other imageboards and is also an optional feature. (The rest of the end sentence was gone because of some lousy person who randomly put 'IT'S COUNTRYBALL NOT POLANDBALL')

Another large Polandball community is headquartered on Reddit. On Reddit is a "subreddit" named eponymously after Polandball. It currently has 590,596 subscribers around the world, mostly from America and Europe. It is known for its strict rules for how comics and comments are posted and shared. Many regard the subreddit as a source for high-quality comics, while others criticize it for its heavy moderation or its tendency toward a more complex style of art. Controversial rules include the banning and temporary banning of certain jokes and a heavy comment policy that bans the use of any meme (including subtle meme references and even having a meme title for a comic).

How Polandball walks
Many of the elements that made up the original comics have been carried on in later works. The most apolitical nature of Polandball is something that has remained with it throughout its history. Most comics are very innocent and not actual offense, and any offense triggered is usually pinned and made fun of in a way that still gets across the innocence of what is going on. The comics can even reveal the creator's character (poorly-conceived comics are often very nationalist and unhumorous, akin to the user itself).

This innocence of Polandball stems from the fact that many jokes FALCO created for Polandball were simply made up of Wojak's ramblings. As an example, it is obvious that not all Polish people work for Britain as plumbers that no related jokes can be too offensive. It remains, in spite of this, accurate enough to be recognized across the internet by many different nationalities as poking fun of international behaviors. This does not mean that Polandball is non-offensive - rather, it is as offensive as possible while remaining innocent of what it talks about. This is so that the community surrounding Polandball can return and participate in it regardless of any real offense taken to the viewer. Usually, how abrasively offensive a joke in Polandball is related to how influential the actual country is. For example: jokes about America are very common and can be very deadpan, jokes about Liechtenstein are rarer and usually about how small and irrelevant, yet very stable, it is as a country.

The many different Polandball-related communities across the internet often put in place rules and social stigmas so that the foundation and principles of the meme remain with it.

Note: Many of these game links are outdated. It's recommended you try and find the correct links.

Poland can into space! (Lemon Tea)

Dictators: No Peace is a video game developed by RPN Indie Developer. The war and dictator simulation game is simple and fun to play, it is available on Android, iOS, Microsoft Windows, Linux, Macintosh operating systems.

Retrieved from "https://www.polandballwiki.com/w/index.php?title=Polandball_(meme)&oldid=1272141"
Categories:
Cookies help us deliver our services. By using our services, you agree to our use of cookies.